Welcome to the sixth issue of MetaboNews, a monthly newsletter for the worldwide metabolomics community. In this month's issue, we feature a Research Spotlight article on a paper entitled "Understanding and Classifying Metabolite Space and Metabolite-Likeness." This newsletter is being produced by The Metabolomics Innovation Centre (TMIC, http://www.metabolomicscentre.ca/), and is intended to keep metabolomics researchers and other professionals informed about new technologies, software, databases, events, job postings, conferences, training opportunities, interviews, publications, awards, and other newsworthy items concerning metabolomics. We hope to provide enough useful content to keep you interested and informed and appreciate your feedback on how we can make this newsletter better (metabolomics.innovation@gmail.com).

Current and back issues of this newsletter can be viewed from the newsletter archive (http://www.metabonews.ca/archive.html).

In metabolomics there is a recurrent bottleneck: metabolite identification.  Knowing the identity, i.e., the chemical structure, of the detected compounds is essential to interpret the experimental results.

Candidate structures that match experimental data are proposed either by querying molecular databases or by using chemical structure generators. In either case, the expert can face a large list of compounds, from which to chose the correct structure. This list could be ranked according to the metabolite-likeness of the compounds.

With this work we wanted to answer two questions:
This work describes the application of computational tools to predict the metabolite-likeness score of a molecule, i.e., how much it resembles a metabolite, and to acquire a global understanding of how the space of human metabolites is organized.

Molecules present in both datasets were removed, as well as molecules in the HMDB that were described as drugs.

What are the common characteristics of human metabolites?

Several physicochemical properties were calculated for the HMDB and ZINC datasets. Principal component analysis (PCA) was performed. The result of this PCA (Figure 1) reveals that both datasets cannot be completely separated on the basis of physicochemical properties. This lack of separation observed in the PCA, made us think that the utilization of more sophisticated methods was required. 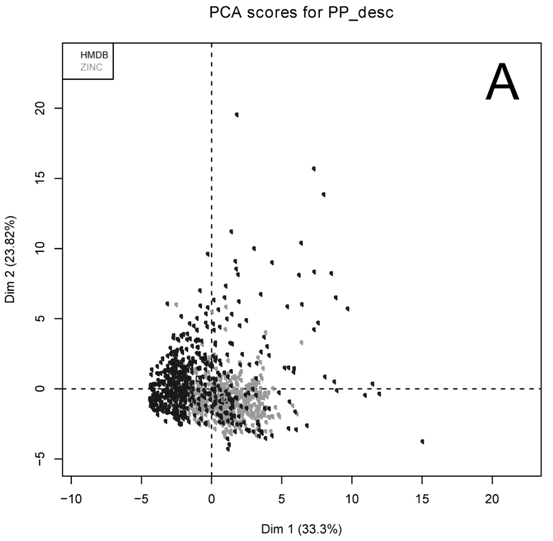 Figure 1. Principal component analysis of the HMDB and ZINC datasets.

By looking at the properties that contributed the most to the slight separation in the PCA (Figure 2), we concluded that metabolites are more soluble in water, have a lower molecular weight, have less complex structures, and fewer carbon atoms than non-metabolites. Furthermore, Polar Surface Area (PSA) tends to be larger in metabolites, suggesting that they do not penetrate cell membranes as efficiently as non-metabolites. 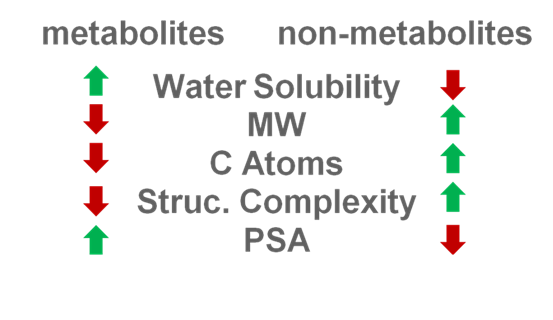 Figure 2. Physicochemical properties contributing most to the variance in the first two principal components of the PCA.

Molecules from the HMDB and ZINC were described using ECFP_4 features, which can be seen as substructures, and partitioned using a Classification Tree (Figure 3).  At each branching point of the tree, a feature is chosen when it maximizes the split between metabolites and non-metabolites.

Figure 3. Classification tree of the ECFP_4 features of the HMDB and ZINC datasets.

From this we learn that hydroxyl groups are characteristic of metabolites. Also, nitrogen-containing moieties correlate with non-metabolites. Acyclic molecules lacking hydroxyls are likely to be metabolites.

Can we predict the metabolite-likeness of a chemical structure?
Building the model

The process of model building is depicted in Figure 4. A standardization process cleans the molecules from both databases. Diversity selection is performed to reduce the impact that overrepresented families of metabolites, for instance lipids, might have in the model. This involved clustering each dataset, where the cluster centers were collected as the training set and the other compounds were used as the test set. 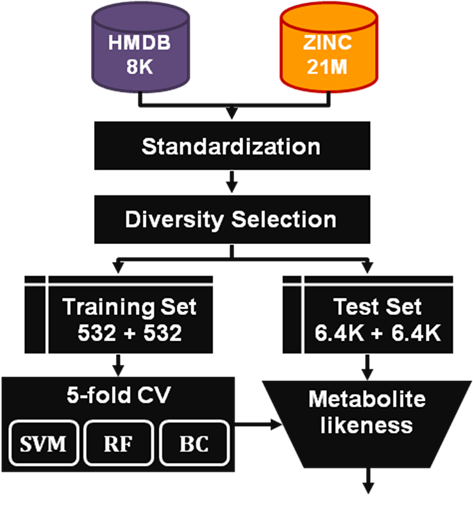 Since SVM and RF classifiers require the tuning of some metaparameters, we performed a five-fold cross validation to select their optimal values. Once we had the metaparameters, fifteen models (five representations x three classifiers) were built. These models were used to classify the molecules in the test set and, as a result, the best performing model was the one built with Random Forest and MDL Public Keys. It classified correctly 99.84% of the metabolites and 88.79% of the non-metabolites.
Prospective validation of the model

A common problem of predictive models is how they perform when predicting new objects. Hence we compiled three prospective validation sets to test the quality of our best model. The first dataset contained 457 metabolites that had not yet been included in the HMDB. The second dataset represented non-metabolites and included molecules from ChEMBL, which can be seen as background dataset alternative to ZINC. The third dataset were drugs from DrugBank. These were selected to test the hypothesis that many drugs tend to mimic metabolites, or at least they are more metabolite-like than screening compounds.

The results (Figure 5) showed that 95.84% of the new metabolites were predicted correctly. Concerning drugs, 54.3% obtained a metabolite-likeness of 50% or higher, which was in accordance with our assumption that many drugs resemble metabolites. For the ChEMBL compounds, only 22.29% were predicted as metabolites. 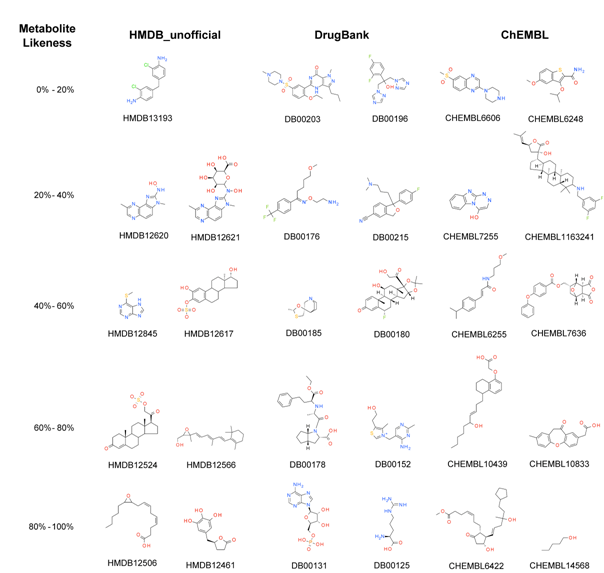 These results demonstrate that our model is successful at identifying whether a molecule is a metabolite or not. We expect metabolite-likeness prediction to help studies that involve metabolite identification in the future, when no database match is found for the unknown compound. Then the candidate structures are generated based on mass spectrometry data, e.g., elemental composition, using a structure generation tool. These output molecules would be ranked according to their metabolite-likeness.


Please note: If you know of any metabolomics research programs, software, databases, statistical methods, meetings, workshops, or training sessions that we should feature in future issues of this newsletter, please email Ian Forsythe at metabolomics.innovation@gmail.com.

Metabolomics is an emerging field that is complementary to other omics sciences and that is gaining increasing interest across all disciplines. Because of metabolomics' unique advantages, it is now being applied in functional genomics, integrative and systems biology, pharmacogenomics, and biomarker discovery for drug development and therapy monitoring. More than 95% of today's biomarkers are small molecules or metabolites (MW <1500 Da), which can be used for disease testing, drug testing, toxic exposure testing, and food consumption tracking. While standard clinical assays are limited in the number and type of compounds that can be detected, metabolomics measures many more compounds. Since a single compound is not always the best biomarker (diagnostic, prognostic or predictive), healthcare practitioners can use metabolomics information about multiple compounds to make better medical decisions. Global metabolic profiling is now being used to determine clinical biomarkers in assessing the pathophysiological health status of patients.

In the following two recent studies, metabolomics approaches were used to develop biomarker tools for the identification of biomarkers associated with diabetic kidney disease and ovarian cancer, respectively.

In this paper, the research team performed metabolite profiling to identify early-stage biomarkers for diabetic kidney disease (DKD) using gas chromatography-mass spectrometry (GC-MS) and liquid chromatography-mass spectrometry (LC-MS). A clinical indicator of DKD is abnormally high urinary albumin excretion rates. The goal of the study was to uncover urinary biomarkers that allow one to differentiate between the progressive and non-progressive forms of albuminuria in humans. As a result of this work, the researchers pinpointed acyl-carnitines, acyl-glycines, and metabolites related to tryptophan metabolism as the differentiating biomarkers.


This research team sought to characterize the human ovarian metabolome and identify disease-associated changes due to primary epithelial ovarian cancer (EOC) and metastatic ovarian cancer (MOC). The team used three analytical platforms: 1. gas chromatography mass spectrometry (GC/MS), 2. liquid chromatography tandem mass spectrometry (LC/MS/MS) set up to catalog positive ions, and 3. LC/MS/MS set up to catalog negative ions. According to this paper, the human ovarian metabolome consists of 364 biochemicals. Upon transformation of the ovary, two energy utilization pathways were perturbed, namely β-oxidation of fatty acids and glycolysis, and the following metabolites were present at increased levels in EOC and MOC: carnitine, acetylcarnitine, and  butyrylcarnitine. In EOC, there were significant increases in phenylpyruvate and phenyllactate. In both EOC and MOC, the research team also found increased levels of 2-aminobutyrate. Metabolites found at increased levels in various disease states may serve as candidate biomarkers for the progression of ovarian cancer.

Please note: If you know of any metabolomics news that we should feature in future issues of this newsletter, please email Ian Forsythe (metabolomics.innovation@gmail.com).


Please note: If you know of any metabolomics lectures, meetings, workshops, or training sessions that we should feature in future issues of this newsletter, please email Ian Forsythe (metabolomics.innovation@gmail.com).

This is a resource for advertising positions in metabolomics. If you have a job you would like posted in this newsletter, please email Ian Forsythe (metabolomics.innovation@gmail.com). Job postings will be carried for a maximum of 4 issues (8 weeks) unless the position is filled prior to that date.

This section is intended for very highly qualified individuals (e.g., lab managers, professors, directors, executives with extensive experience) who are seeking employment in metabolomics. We encourage these individuals to submit their position requests to Ian Forsythe (metabolomics.innovation@gmail.com). Upon review, a limited number of job submissions will be selected for publication in the Jobs Wanted section.

Note: There are no postings at this time.

To subscribe/unsubscribe, simply visit https://mail.cs.ualberta.ca/mailman/listinfo/MetaboNews. Please forward this newsletter to any interested colleagues or collaborators. Send your comments and feedback about this newsletter to metabolomics.innovation@gmail.com.