Welcome to the second issue of MetaboNews, a monthly newsletter for the worldwide metabolomics community. In this month's Statistical Spotlight article, we feature a commentary on Statistical Analysis of Metabolomic Data, based largely on a lecture given by Dr. David Wishart of the University of Alberta. This newsletter is being produced by The Metabolomics Innovation Centre (TMIC, http://www.metabolomicscentre.ca/) and is intended to keep metabolomics researchers and other professionals informed about new technologies, software, databases, events, job postings, conferences, training opportunities, interviews, publications, awards, and other newsworthy items concerning metabolomics. We hope to provide enough useful content to keep you interested and informed and appreciate your feedback on how we can make this newsletter better (metabolomics.innovation@gmail.com).


Metabolomics is a relatively new omics technology. Both its analytical platforms and bioinformatics tools are being rapidly developed. In this commentary, the author briefly summarizes current concepts and progress in metabolomic data analysis. The content is based mainly on the lectures given by Dr. David Wishart during the Canadian Bioinformatics Workshop on Informatics and Statistics for Metabolomics (June 16-17, 2011, Edmonton, Canada).

Data normalization is necessary
There are two types of normalizations—biological normalization and statistical normalization. Biological normalization aims to reduce the biological variances unrelated to the conditions of interest, e.g., variance introduced during sample preparation (i.e., differences in sample volumes) or different dilution factors in urine samples. Researchers understand that it is necessary to address this difference before proceeding to the next level of data analysis. Statistical normalization aims to reduce the statistical variances that may obscure the discovery of small, but potentially significant signals. For instance, metabolite concentrations usually span several orders of magnitude (submicromolar to millimolar) and the effects from the highly abundant metabolites tend to dominate. However, as we know, a compound’s biological significance is not proportional to its concentration. Therefore, it is important to perform appropriate data transformations to make metabolites more comparable to each other (i.e., to obtain a homogenous data set).

Data visualization is critical
Intuitive data visualization is critical for data exploration and quality assurance. As metabolomic data usually contains over hundreds of features, numerical summaries can often hide important messages which can be easily picked up through graphical presentation. Fig.1 illustrates such a case. An outlier (indicated by a red arrow) is obvious to any examiner. Is it caused by some measurement error or typographical error? Addressing such an issue (i.e., through removal of the outlier) may significantly improve the results of the downstream data analysis. 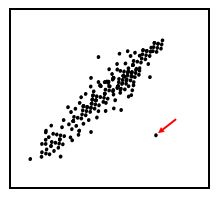 
Combining univariate and multivariate methods to achieve better understanding
Identification of significant metabolites is usually the first step towards finding useful biomarkers or identifying associated biological processes. Univariate approaches are widely used in this regard. Many well-established approaches (e.g., t-tests, ANOVA) are available. The main advantages of univariate methods are easy to understand and support for very flexible experimental designs.

Multivariate statistics involves the simultaneous analysis of more than two statistical variables. Because metabolomic data usually contains hundreds of metabolite concentrations, multivariate data analysis is considered ideal for such data sets. The most widely used multivariate methods in metabolomics are probably principal component analysis (PCA) and partial least squares discriminant analysis (PLS-DA). Both of them are capable of projecting high-dimensional data into two or three dimensions that can be conveniently visualized for pattern discovery. PCA is an unsupervised method, suitable to see if natural clusters form or if data separates well. Fig. 2 illustrates a PCA result which forms three natural clusters. PLS-DA is a supervised method that uses group information to help improve the class separation and is often used when PCA shows little separation. 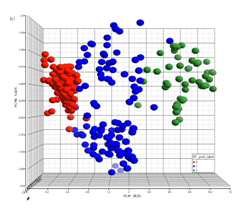 
Is there an overall significant difference between the metabolomic profiles?
For univariate analysis such as t-tests, researchers can judge whether a given metabolite is significant based on its p-value. For multivariate approaches, calculating a p-value is difficult as we do not know the characteristics of the underlying distribution. However, we can calculate an empirical p-value using a non-parametric approach such as a permutation test. This approach involves randomly reassigning the class labels and performing the analysis on the newly labeled data set. The process is repeated hundreds or thousands of times and the performance measures are plotted on a histogram for visual assessment. From the resulting histogram it is possible to determine if the of the original class assignment is significantly different from or a part of the distribution based on the permuted class assignments. The empirical p-value is calculated as the proportion of times that the permuted data yielded a better result than the one using the original labels. For example, if none of the permuted classes is better than the observed one in 2000 permutations, the p-value is reported as p<0.0005 (less than 1/2000). With more permutations, the empirical p-value will be very close to the real p-value. The process is illustrated in Fig. 3. 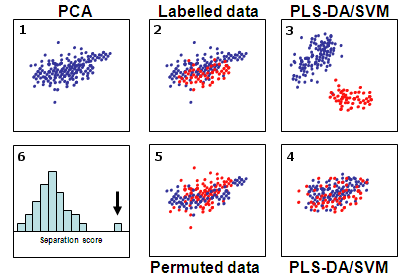 Figure 3. Permutation tests to evaluate the significance of separation. Panel 1 shows the overview by principal component analysis (PCA). Panel 2 shows the same PCA result colored by group labels. Only slight separation can be seen between the two groups. Panel 3 shows the supervised methods PLS-DA/SVM (partial least squares-discriminant analysis/support vector machines) on the same dataset with much better separation. Panels 4 and 5 shows the separations using the permuted datasets. The histogram in Panel 6 shows the comparison between the results using permuted datasets and the one using original data (indicated by a black arrow). In this case, the separation is clearly significant.


Conclusions
Metabolomics is a recent addition to the omics family. There are certain advantages to being the last to arrive. Many of the statistical and computational methods are borrowed from other omics platforms and adapted to the specific needs of metabolomic data, allowing metabolomics to quickly catch up to its more mature cousins. Another important source of concepts grew from the field of chemometrics such as the use of PCA and PLS-DA. Most of the approaches discussed here are freely available online through the MetaboAnalyst (http://www.metaboanalyst.ca) web application.


Please note: If you know of any metabolomics research programs, software, databases, statistical methods, meetings, workshops, or training sessions that we should feature in future issues of this newsletter, please email Ian Forsythe at metabolomics.innovation@gmail.com.


Metabolomics is an emerging field that is complementary to other omics sciences and that is gaining increasing interest across all disciplines. Because of metabolomics' unique advantages, it is now being applied in functional genomics, integrative and systems biology, pharmacogenomics, and biomarker discovery for drug development and therapy monitoring. More than 95% of today's biomarkers are small molecules or metabolites (MW <1500 Da), which can be used for disease testing, drug testing, toxic exposure testing, and food consumption tracking. While standard clinical assays are limited in the number and type of compounds that can be detected, metabolomics measures many more compounds. Since a single compound is not always the best biomarker (diagnostic, prognostic or predictive), the use of metabolomics allows information about multiple compounds to be used together to make better medical decisions. Global metabolic profiling has now been used to determine clinical biomarkers in assessing the pathophysiological health status of patients.

In the following two recent studies, metabolomics approaches were used to develop biomarker tools for the diagnosis of malignancy in adrenal tumours and hepatocellular carcinoma, respectively.

This paper presents a metabolomics-based biomarker approach for the differential diagnosis of adrenal tumors. The objective was to develop a novel mass spectrometry based urinary steroid profiling approach and to investigate whether, after combining with computational data analysis tool, this metabolomic approach could be used to diagnose adrenal malignancy. Urinary steroid profiles of 102 ACA patients (with benign adrenocortical adenoma) and 45 ACC patients (with malignant) was performed using gas chromatography-mass spectrometry (GC-MS). Data strongly suggest that the urine steroid metabolomics could be used as a specific biomarker tool for the differential diagnosis of adrenal tumors. After validating for large cohorts of patients, this approach could potentially be used as a diagnostic test in routine clinical practice.

Serum and urine metabolomics approach was used to investigate potential metabolite biomarker for human hepatocellular carcinoma (HCC). Serum and urine metabolic profiles of 177 subjects (71 healthy individuals, 24 benign liver tumor patients, and 82 HCC patients) were performed using two analytical methods—GC-TOFMS and UPLC-QTOFMS—followed by univariate and multivariate statistical analyses. A significant number of serum and urine metabolite markers relevant to HCC were identified that are involved in several key metabolic pathways such as bile acids, free fatty acids, urea cycle, and methionine metabolism. Bile acids, histidine, and inosine were shown to be of greatest statistical significance. This global metabolomics profiling approach could be used as a screening tool for diagnosing HCC.

Please note: If you know of any metabolomics news that we should feature in future issues of this newsletter, please email Ian Forsythe (metabolomics.innovation@gmail.com).


Please note: If you know of any metabolomics lectures, meetings, workshops, or training sessions that we should feature in future issues of this newsletter, please email Ian Forsythe (metabolomics.innovation@gmail.com).


This is a resource for advertising positions in metabolomics. If you have a job you would like posted in this newsletter, please email Ian Forsythe (metabolomics.innovation@gmail.com). Job postings will be carried for a maximum of 4 issues (8 weeks) unless the position is filled prior to that date.


Note: There are no postings at this time.

To subscribe/unsubscribe, simply visit https://mail.cs.ualberta.ca/mailman/listinfo/MetaboNews. Please forward this newsletter to any interested colleagues or collaborators. Send your comments and feedback about this newsletter to metabolomics.innovation@gmail.com.